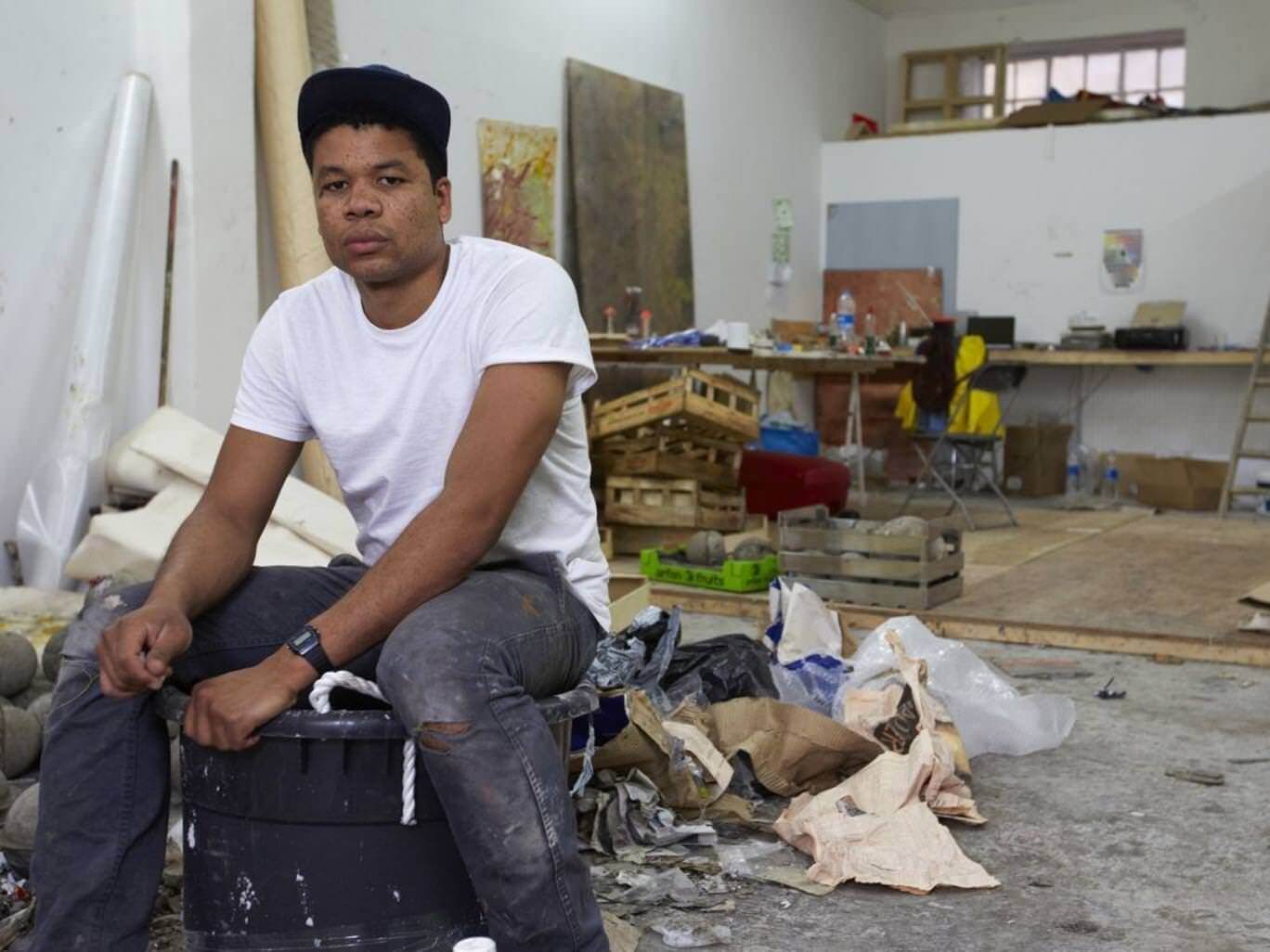 Oscar Murillo‘s large-scale paintings imply action, performance, and chaos, but are in fact methodically composed of rough-hewn, stitched canvases that often incorporate fragments of text as well as studio debris such as dirt and dust. His paintings, video works, and performances are tied to a notion of community stemming from the artist’s cross-cultural ties to London, where he currently lives and works, and Colombia, where he was born in 1986.
Murillo earned his B.F.A. in 2007 from the University of Westminster, London, followed by his M.F.A. in 2012 from the Royal College of Art, London. In 2013, the artist joined David Zwirner. The gallery’s inaugural exhibition with Murillo, titled A Mercantile Novel, was presented at David Zwirner, New York in 2014. binary function marked his first solo presentation at David Zwirner, London, on view October 10 to November 20, 2015.
As part of Performa 15 in New York earlier this year, Murillo presented Lucky dip, a series of performances and installations that took place over the course of one week at the Alexander Hamilton U.S. Custom House, an important historical site in downtown Manhattan. An upcoming solo exhibition is planned for the spring of 2016 at the Yarat Contemporary Art Centre in Baku, Azerbaijan. Also in 2016, the artist will participate in the 20th Biennale of Sydney: The future is already here—it’s just not evenly distributed.
Murillo’s works and projects have been the subject of solo exhibitions at prominent institutions worldwide. Most recently, presentations were held in 2015 at the Museo de Arte de la Universidad Nacional de Colombia, Bogotá; Centro Cultural Daoíz y Velarde, Madrid (part of ArcoColombia 2015); and Artpace, San Antonio, Texas. In 2014, Oscar Murillo: An average work rate with a failed goal showcased new paintings, sculptures, and video works at 40mcube in Rennes, France, organized as part of the 4th Les Ateliers de Rennes – Biennale d’art contemporain. Also in 2014 a body of new work was presented at The Mistake Room in Los Angeles on the occasion of the venue’s inaugural exhibition. In 2013, the South London Gallery hosted the artist’s first major solo show in the United Kingdom. In 2012, he created new paintings on site during a five-week summer residency at the Rubell Family Collection in Miami, which were shown later that year marking his first solo exhibition in the United States. Other venues that have exhibited his works and projects include the Showroom MAMA, Rotterdam (2013) and the Serpentine Gallery, London (2012).
In 2014, Murillo participated in numerous international group exhibitions, including The Forever Now: Contemporary Painting in an Atemporal World, The Museum of Modern Art, New York; 1st International Biennial of Contemporary Art of Cartagena de Indias, Cartagena, Colombia; RE: Painted | ‘Painting’ from the collection, Stedelijk Museum voor Actuele Kunst (S.M.A.K.), Ghent; Fútbol: The Beautiful Game, Los Angeles County Museum of Art; and Don’t You Know Who I Am? Art after Identity Politics, Museum van Hedendaagse Kunst Antwerpen, Antwerp.
For Murillo’s ongoing long-term project Frequencies, created in collaboration with members of his family and political scientist Clara Dublanc, canvases are temporarily affixed to classroom desks in selected schools across the globe, encouraging students aged ten to sixteen to create any kind of mark making—drawing, writing, doodling. He recently debuted the Frequencies project with a large-scale installation of canvases as part of the 56th Venice Biennale: All the World’s Futures in 2015. In conjunction, David Zwirner Books will publish a comprehensive book, standing as a directory of the project to date, which includes reproductions of canvases and photographs of schools and students.

Exhibitions
Mixing It Up: Painting Today
An exhibition celebrating the diversity of painting in the UK
09 Sep 2021 - 12 Dec 2021
Hayward Gallery
London