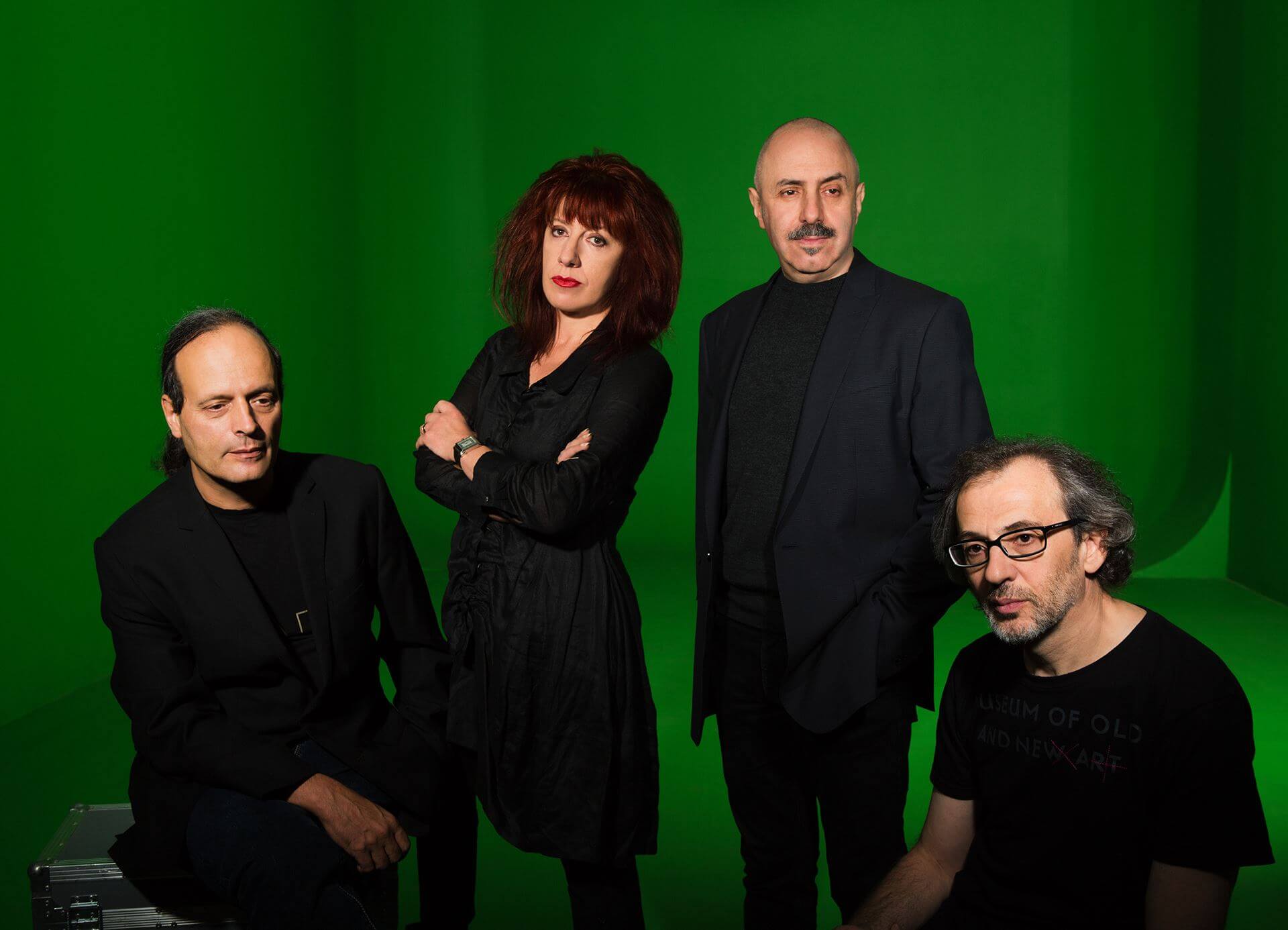 First formed as AES Group in 1987 by Arzamasova, Evzovich, and Svyatsky, the collective became AES+F when Fridkes joined in 1995. AES+F work at the intersection of traditional media, photography, video and digital technologies. They define their practice as a kind of “social psychoanalysis” through which they reveal and explore the values, vices and conflicts of contemporary global culture.

AES+F achieved worldwide recognition and acclaim in the Russian Pavilion at the 52nd Biennale di Venezia in 2007 with their provocative, other-worldly Last Riot (2007), the first in a trio of large-scale, multichannel video installations of striking originality that have come to define both the AES+F aesthetic and the cutting edge of the medium’s capacities. The second of the series, The Feast of Trimalchio (2009), appeared in Venice in 2009, and the third, Allegoria Sacra (2011), debuted at the 4th Moscow Biennale in 2011. United as The Liminal Space Trilogy, this tour-de-force series was premiered in September 2012 at the Martin-Gropius-Bau, Berlin, and the Moscow Manege, the central exhibition hall of the artists’ home city, and has since been shown on many occasions at various museums and festivals. In 2015, AES+F premiered Inverso Mundus at the 56th Biennale di Venezia. Inverso Mundus was later shown at the Kochi-Muziris Biennial and a number of other museums and festivals all over the world.

Between 2016 and 2019, AES+F have also worked in set design for theater and opera. The artists created their first video set design for Psychosis, a reinterpretation of Sarah Kane’s famous play, 4:48 Psychosis, directed together with Alexander Zeldovich. Psychosis premiered at Electrotheater Stanislavsky in Moscow in June 2016. In 2019, the group premiered their first opera together with the Italian opera director Fabio Cherstich, a reimagined Turandot acclaimed by critics as audacious and visionary. Turandot was created as an international co-production at the initiative of the Teatro Massimo in Palermo, together with Teatro Comunale in Bologna, Badisches Staatstheater Karlsruhe, and Lakhta Center in St. Petersburg.

For more than a decade, works by AES+F have been showcased in signature festivals and biennial exhibitions of contemporary art around the world, including — in addition to Moscow and Venice — those of Adelaide, Gwangju, Havana, Helsinki, Istanbul, Kiev, Kochi-Muziris, Lille, Lyon, Melbourne, St. Moritz, Sydney, Taipei, Vancouver, and many others. Their work has also been featured in influential events devoted to new media — such as ARS Electronica (Linz), Mediacity Seoul and Video Zone (Tel Aviv) — and photography — such as FotoFest (Houston), Les Rencontres d’Arles and Moscow’s Photo Biennial.

Their works appear in some of the world’s principal collections of contemporary art, such as Moderna Museet (Stockholm), MOCAK (Kraków), Sammlung Goetz (Munich), ZKM (Karlsruhe), Art Gallery of South Australia (Adelaide), and the Museum of Old and New Art (Tasmania), Centre de Arte dos de Mayo (Madrid), Centre Pompidou (Paris), and the Louis Vuitton Foundation (Paris), the Vanhaerents Art Collection (Brussels), Taguchi Art Collection (Tokyo), and many others. Their work is also well represented in some of Russia’s principal national museums, such as The State Tretyakov Gallery (Moscow), The State Russian Museum (St. Petersburg), the National Center for Contemporary Art, and the Multimedia Art Museum (Moscow).

Exhibitions
unREAL: The algorithmic present
The exhibition examines the complexity of todays life in which the separation between the digital and...
08 Jun 2017 - 20 Aug 2017
HEK (House of Electronic Arts)
Basel
Art Spaces