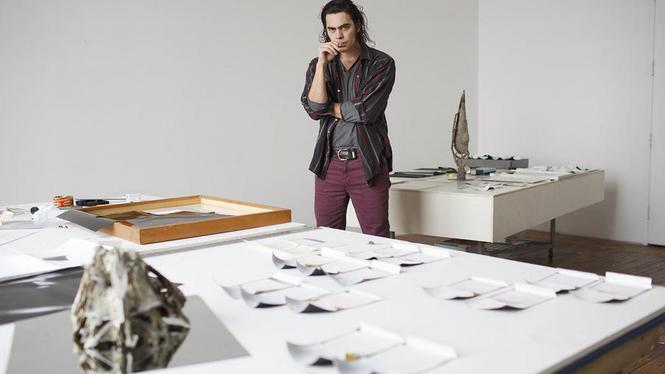 Giorgio Andreotta Calò’s research revolves around an intense crossover dimension as a way of approaching his work, developed through a process of withdrawing fragments from reality and the re-appropriation of architecture, landscape and his own history. Calò creates works that cross boundaries between sculpture, actions and direct architectural intervention.
Born in Venice in 1979, Giorgio Andreotta Calò lives between Amsterdam and Venice. He studied at the Accademia di Belle Arti di Venezia (1999-2005) and continued his studies at the KunstHochSchule Berlin (2003-2004). From 2001 to 2003 and also in 2007 he was assistant to Ilya and Emilia Kabakov. He was artist in residence at the Rijksakademie Van Beeldende Kunsten, Amsterdam (2009-2011). Since 2003 Andreotta Calò has had solo exhibitions throughout Europe: Institut Culturel Italien de Paris (2014); SMART Project Space, Amsterdam (2012) and Galleria Civica, Trento, Italy (2009), among others. His work was presented at the 54th Venice Biennale (2011), curated by Bice Curiger. He won the Premio New York, promoted by the Italian Minister for Foreign Affairs (2014) and the Premio Italia for contemporary art, promoted by the MAXXI Museum in Rome (2012).

Exhibitions
The Fallen Astronaut
“The fallen astronaut” is the title of the exhibition curated by Valentina Lacinio which...
11 Mar 2016 - 10 May 2016
A plus A
Venice

Exhibitions
Par tibi, Roma, nihil
In an area that has been closed to the public for decades (Domus Severiana, Palatine Stadium, Lower Peristyle...
23 Jun 2016 - 18 Sep 2016
Roman Forum and the Palatine Hill
Rome