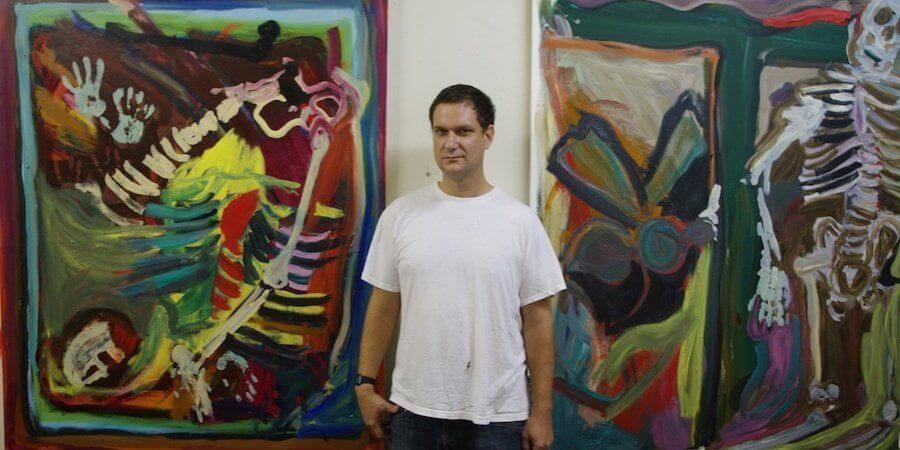 The work of Josh Smith is distinguished by his mastery of multiple mediums (including painting, collage, sculpture, book and printmaking, and ceramics), and his tendency to acknowledge trends in painting and sculpture by expressly upending them. His most iconic works are paintings that boldly feature his name as their subject; in recent years, the name has given way to motifs such as leaves, fish, skeletons, insects, ghosts, and sunsets. In selecting these rather arbitrary subjects and rendering them in a manner that is by turns aggressive, playful, repetitive, and oblique, Smith compels us to move beyond aesthetics towards a focus on process and looking.
Josh Smith (b. 1976) is from Knoxville, Tennessee and lives and works in New York. He has had numerous solo exhibitions in the United States and abroad, including Hidden Darts at MUMOK in Vienna in 2008, Who Am I at De Hallen Haarlem in 2009, Josh Smith at the Centre d’Art Contemporain Genève in 2009, The American Dream at The Brant Foundation in Greenwich, CT in 2011, and most recently, Josh Smith at MACRO Testaccio, Rome in 2015. He has also participated in significant group exhibitions such as The Generational Triennial: Younger Than Jesus at the New Museum in New York, ILLUMInations in the 2011 Venice Biennale, Le Printemps de Septembre in Toulouse, The Painting Factory: Abstraction after Warhol at the Museum of Contemporary Art, Los Angeles, and The Forever Now: Contemporary Painting in an Atemporal World at the Museum of Modern Art, New York. His works are in important public collections including the Centre Pompidou, Paris, MUMOK, Vienna, the Whitney Museum of American Art, New York, and the Museum of Modern Art, New York.