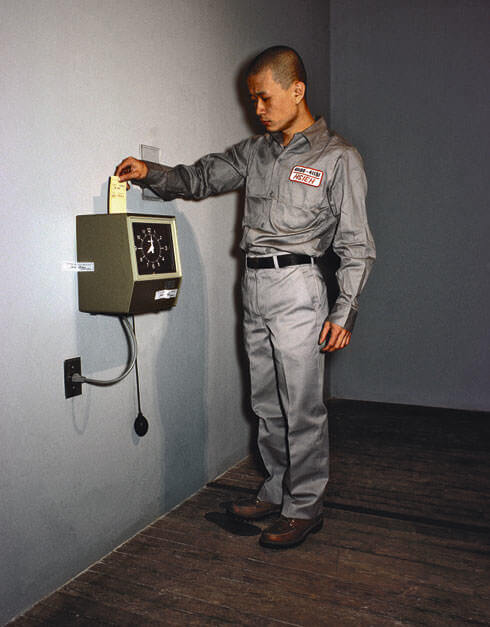 Tehching Hsieh was born in 1950 in Nan-Chou, Taiwan.
Hsieh dropped out of high school in 1967 and took up painting. After finishing his army service (1970-1973), Hsieh had his first solo show at the gallery of the American News Bureau in Taiwan. Shortly after this show, he stopped painting. In 1973, Hsieh made a performance action, Jump Piece, in which he broke both of his ankles. He was trained as a sailor, which he then used as a means to enter the United States. In July of 1974, Hsieh arrived at the port of a small town by the Delaware River near Philadelphia. He was an illegal immigrant for fourteen years until he was granted amnesty in the US in 1988.
Beginning in the late 1970s, Hsieh made five One Year Performances and a Thirteen-year Plan, inside and outside his studio in New York City. Using long durations of time as context for the work, making art and life simultaneous, the first four One Year Performances made Hsieh a regular name in the art scene in New York; the last two pieces, in which he intentionally retreated from the art world, set a tone of sustained invisibility.
Since the Millennium, released from the restriction of not showing his works during the period of theThirteen-year Plan, Hsieh has exhibited his work in North and South America, Asia and Europe. Hsieh’s One Year Performance 1978-1979 (often referred to as Cage Piece) was shown at the Museum of Modern Art inPerformance 1: Tehching Hsieh in 2009; One Year Performance 1980-1981 (often referred to as Time Clock Piece) was included in The Third Mind: Artists Contemplate Asia, 1860-1989, at the Guggenheim Museum, 2009, the Liverpool Biennial in the United Kingdom and the Gwangju Biennial in South Korea, both in 2010, and in the São Paulo Biennial, 2012. One Year Performance 1980–1981 was also shown in a solo exhibition at the Ullens Center for Contemporary Art in Beijing, China and Carriageworks in Sydney, Australia.
In 2013, the West Kowloon Cultural District Authority/M+ Museum in Hong Kong announced the acquisition of the six individual performance works realized by Hsieh between 1978 and 1999, making it the most comprehensive collection of Hsieh’s work to be held in a public institution.
Hsieh and his wife, Qinqin Li, now live in Brooklyn.

Exhibitions
Spirit Labor: Duration, Difficulty, and Affect
The exhibition reflects on the effects of time on human beings and on their traces.
10 Sep 2021 - 30 Jan 2022
Garage Museum of Contemporary Art
Moscow