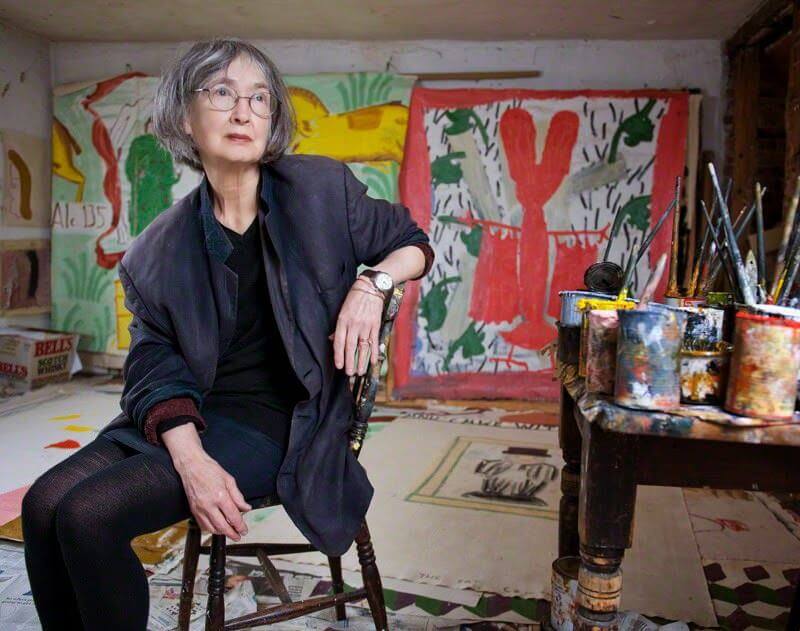 Rose Wylie is a Contemporary painter whose work only began to receive attention and critical acclaim late in her life. Wylie works on large-scale canvases using cartoonish, child-like imagery rendered in expressive marks, sometimes inspired by art history or pop culture such as movies and television. Her work is frequently compared to Philip Guston.
Wylie went to Folkestone and Dover School of Art, 1952 – 1956 and much later attained a post-graduate degree in Painting from the Royal Academy Schools London, 1979 –1981.
In 2010 she was selected as single UK representative in the Women To Watch exhibition at the National Museum of Women in the Arts in Washington DC, USA. Previous group exhibitions include Rose Wylie Evan Holloway at The Approach, London (2011) and East International (2004, selected by Neo Rauch and Gerd Harry Lybke). Previous solo exhibitions include Picture on the Wall at Michael Janssen Gallery, Berlin (2011), What with What at Thomas Erben Gallery, New York (2010), and Film Notes at Union Gallery, London (2010). In 2011 she was a recipient of the Paul Hamlyn award.

Exhibitions
Mixing It Up: Painting Today
An exhibition celebrating the diversity of painting in the UK
09 Sep 2021 - 12 Dec 2021
Hayward Gallery
London

Exhibitions
Rose Wylie: Yellow Sax
This is the artist’s first solo exhibition in Italy and is featuring three large-scale paintings:...
31 May 2017 - 09 Sep 2017
Milan