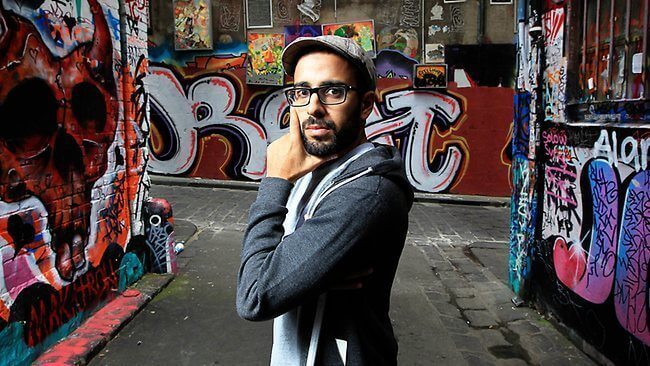 eL Seed is a ‘calligraffiti’ artist, a blend of the historic art of Arabic calligraphy and  the modern art of graffiti, mixing street  culture  from  Paris  and Arabic  history to poetic effect. Born to Tunisian parents in the suburbs of Paris, eL Seed spent his formative years juggling different cultures,  languages,  and  identities.  Today   eL Seed’s  pieces  have  developed out  of  two worlds colliding, with these  two cultures clashing and blending into one another, to form a new identity, a unique mark and a distinctive style.

eL Seed  uses  intricate  composition  in  his  work  to  call not only on the words and their meaning, but also on their movement, which ultimately lures the viewer into a different state of mind.  Working primarily with subjects that seem contradictory, eL Seed’s art reflects the reality of mankind and the world we live in today.
In mid-2012 eL Seed completed his largest piece to date, in the southern Tunisian city of Gabes, a 47 metre high minaret on the Jara mosque, spreading the message of unity. In 2013, he went on to leave his unique and one of a kind mark in Qatar, when he was commissioned by the Qatar Museums Authority to paint  tunnels  in  Doha  on  Salwa Road. eL Seed sought out the help of the  local  community to create 52 individual pieces of art for the tunnel walls. More recently in the summer of 2013 in Paris, eL Seed took part in La Tour Paris 13, the largest collective street art exhibition in the world.

Exhibitions
Between The Lines
The Mine is pleased to announce ‘Between The Lines’ an urban contemporary group show curated by Rom...
11 May 2016 - 08 Jun 2016
Dubai, Sharjah, Abu Dhabi