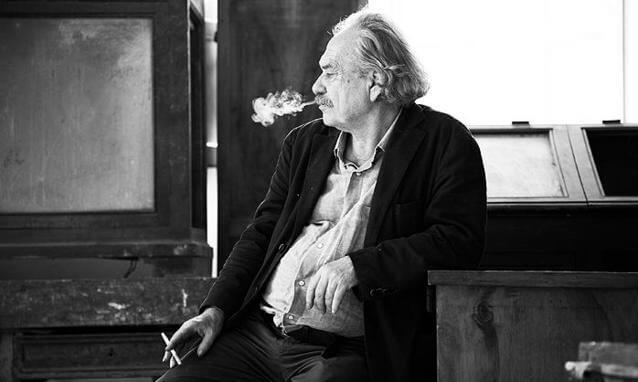 Jannis Kounellis was born in 1936 in Piraeus, Greece. In 1956, Kounellis moved to Rome and enrolled in the Accademia di Belle Arti. While still a student, he had his first solo show, titled L’alfabeto di Kounellis, at the Galleria la Tartaruga, Rome, in 1960. The artist exhibited black-and-white canvases that demonstrated little painterliness; on their surfaces, he stenciled letters and numbers.
Influenced by Alberto Burri as well as Lucio Fontana, whose work offered an alternative to the Expressionism of Art Informel, Kounellis was looking to push painting into new territory. He was inspired, too, by the work of Jackson Pollock and Franz Kline, and by the earlier abstractions of Kazimir Malevich and Piet Mondrian. Kounellis’s painting would gradually become sculptural; by 1963, the artist was using found elements in his paintings. Kounellis began to use live animals in his art during the late 1960s; one of his best-known works included 11 horses installed in the gallery. Kounellis not only questioned the traditionally pristine, sterile environment of the gallery but also transformed art into a breathing entity. His diverse materials from the late.
He died in Rome in 2017

Exhibitions
On Fire
"On Fire", reflects on the most evocative of the primary elements in nature: fire.
22 Apr 2022 - 24 Jul 2022
Giorgio Cini
Venice