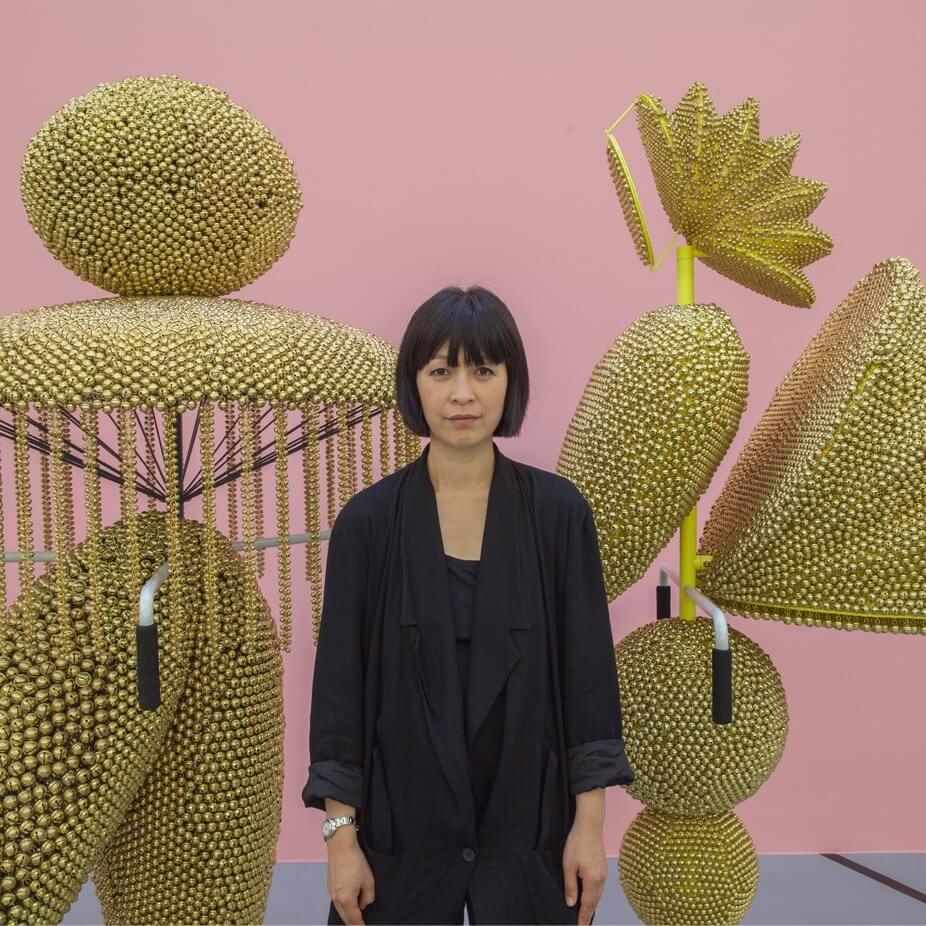 Haegue Yang was born in 1971 in Seoul, South Korea, and received her BFA from Seoul National University. In the late 1990s, she moved to Germany, where she earned an MFA from the Städelschule Frankfurt am Main. Traversing a wide range of media, from collage to performance, Yang’s body of work often features quotidian and domestic found objects ranging from tea cozies to cans of Spam. The artist dissociates such materials from their original contexts, rearranging them into abstract compositions that build upon a unique and personal visual vocabulary. By including perceptual effects generated with the help of heaters, electrical fans, and even scent diffusers, Yang frequently stages multisensory environments, which—together with the mundane objects—become meditations on labor, emotional connection, and dislocation, replete with references to various moments of abstraction throughout art history.
Recognizable motifs recur throughout Yang’s oeuvre, including Venetian blinds; the artist’s first work to feature the slats was Series of Vulnerable Arrangements—Blind Room, which made its debut in 2006 at the São Paulo Biennial. Yang’s series of blinds, arranged into offset planes and set on casters, later appeared at The Tanks at Tate Modern in 2012; these pieces also featured performers who rolled around and interacted with the sculptures in a reference to the choreography in Bauhaus artist Oskar Schlemmer’s modernist Triadisches Ballett(1922). In interviews, Yang has discussed the concept of “permeability to perception” offered by Venetian blinds, which have also appeared as elements of her installations at Documenta (2012) and the Venice Biennale (2009).
Yang often explores sociopolitical concerns, and her oeuvre includes the installation Multi Faith Room (2012), which drew inspiration from generic airport prayer rooms designed to serve adherents of all religions. More recently, she has embraced additional mediums and techniques. While on an artist residency in Glasgow, she produced large-scale macramé sculptures that were accompanied by an iPod soundtrack that the artist listened to while making the work. Subsequent pieces—like Sonic Half Moon Type III—Medium Light #18 andLunar Eclipse Type X—Medium Ultralight #24, both made in 2014—are forms comprising hundreds of small metal bells, which ring in unison when repositioned.
Yang’s work has been featured in the Venice Biennale (2009), the Gwangju Biennial (2010), and the Taipei Biennial (2014). She has been the subject of solo exhibitions at the Walker Art Center, Minneapolis (2009); the New Museum of Contemporary Art, New York (2010); Haus der Kunst, Munich (2012); and the Bergen Kunsthall (2013). Her work has been included in group exhibitions such as The New Décor at Hayward Gallery, London (2010), and Berlin 2000–2011: Playing Among the Ruins at the Museum of Contemporary Art, Tokyo (2012). She received the 2005 Cremer Preis, and was one of two winners of the 2007 Bâloise Art Prize. Yang lives and works in Seoul and Berlin.

Exhibitions
Planet B: Climate Change and the New Sublime
The first exhibition of Radicants, the international curatorial cooperative launched by Nicolas Bourriaud in January 2022, reflects on the aesthetic notion that determines the Anthropocene.
20 Apr 2022 - 27 Nov 2022
Palazzo Bollani
Venice

Exhibitions
Duddell’s x Biennale Of Sydney: Abstraction Of The World
This March, Duddell’s is collaborating with the 21st Biennale of Sydney to present a group exhibition...
20 Mar 2017 - 10 Jul 2017
Duddell’s
Hong Kong

Exhibitions
Soil and Stones, Souls and Songs – Bangkok
Previously presented at the Museum of Contemporary Art and Design in Manila and at Para Site in Hong...
15 Jul 2017 - 31 Oct 2017
Art Center at the Jim Thompson House
Bangkok

Exhibitions
Haegue Yang: In the Cone of Uncertainty
Featuring the artist’s consistent curiosity about the world and tireless experimentation with materialising...
02 Nov 2019 - 05 Apr 2020
The Bass
Miami
Art Spaces