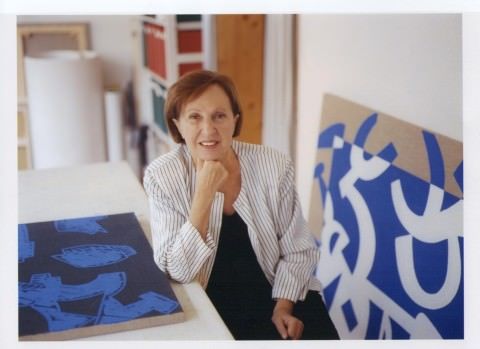 Born on October 9, 1924, in Trapani, Italy, Carla Accardi trained as a painter at the Accademia di belle arti, Florence, before moving to Rome in 1946. Accardi quickly became part of the inner circle of the Art Club and was a frequent visitor to Pietro Consagra’s studio. There she met the artists with whom she would establish the influential postwar group Forma 1 (Form 1, 1947–51): Consagra, Piero Dorazio, Mino Guerrini, Achille Perilli, Antonio Sanfilippo (whom she would marry), and Giulio Turcato. The group’s manifesto, which Accardi signed in 1947, called for reconciling Marxist politics with abstract art. The group’s first exhibition occurred in Rome in 1947, and Accardi’s first solo show soon followed, in 1950 at the Galleria Age d’or, Rome. Her early paintings consisted of interlocking geometric forms.
In the 1950s, Accardi was involved in the wide-reaching attempts to revolutionize abstraction through the hybridization of geometric abstraction and gestural painting, both in Italy, where she appeared in Arte astratta e concreta in Italia—1951 (Abstract and concrete art in Italy—1951) at the Galleria nazionale d’arte moderna, Rome, and in France, where art critic Michel Tapié took an interest in her work. (Tapié would later write the introduction to the catalogue accompanying Accardi’s 1959 solo exhibition at the Galleria Notizie in Turin.) After forswearing painting from 1952 to 1953, Accardi began to introduce pseudo-calligraphic signs into abstract images, as in Labirinto a settori (Labyrinths and fields, 1957), while reducing her palette to white-on-black compositions to explore the relationship between figure and ground.
In 1961 Accardi reintegrated color and began painting on sicofoil, a transparent plastic, instead of canvas. She showcased these new strategies at the 1964 Venice Biennale. By the mid-1960s, she was using these new materials sculpturally. Tenda (Tent, 1965) and Triplice Tenda (Triple tent, 1969) feature sheets of plastic assembled into a tent and covered with brightly colored brushstroke patterns. This phase of Accardi’s oeuvre, which was celebrated in the Ambiente/Arte section of the 1976 Venice Biennale, would prove influential for Arte Povera. In the 1980s she returned to canvas and shifted her focus to the use of signs and chromatic juxtapositions.
Accardi’s first U.S. solo exhibition, Triplice Tenda (Triple Tent), was held at P.S.1 Contemporary Art Center (now MoMA PS1), New York (2001), and the Musée d’art moderne de la Ville de Paris presented a retrospective (2002). Accardi was named Accademico di Brera in Milan in 1996 and received the Cavaliere di Gran Croce the following year. Accardi died on February 23, 2014, in Rome.

Exhibitions
The Great Mother
Through the work of more than a hundred international artists, the exhibition The Great Mother analyzes...
26 Aug 2015 - 15 Nov 2015
Palazzo Reale
Milan

Exhibitions
Una colletiva
The gallery’s second exhibition of this year is dedicated to the own represented artists: Accardi,...
16 Mar 2017 - 15 Apr 2017
Tonelli
Milan