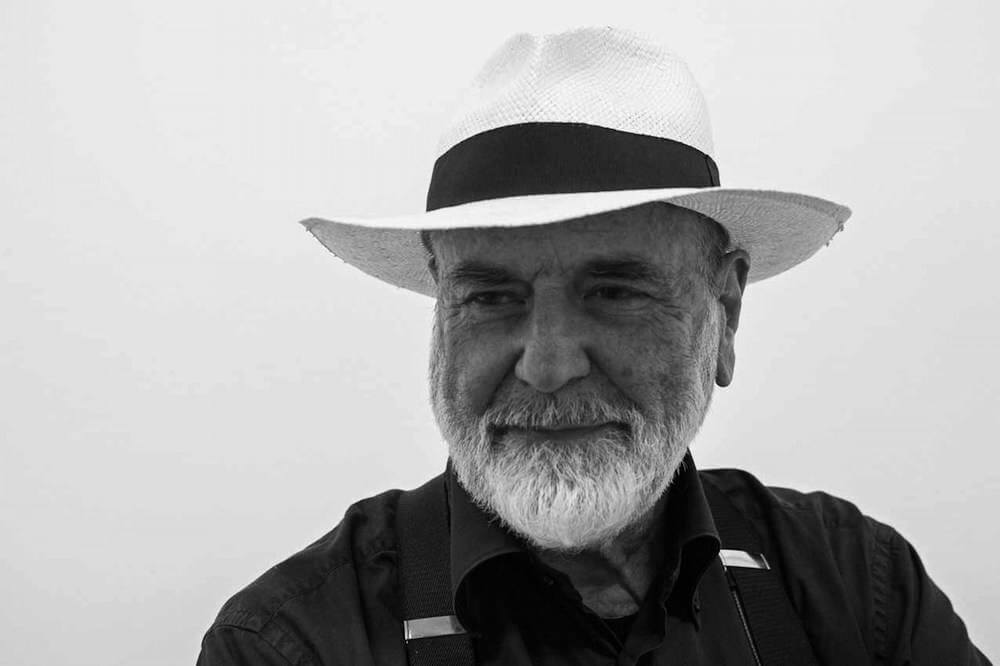 Michelangelo Pistoletto‘s artistic training began in the studio of his father, a painter and restorer, where he went to work at the age of fourteen. He subsequently attended Armando Testa’s advertising design school.
In 1955 he began to exhibit the results of the inquiry into self-portraiture that characterized his painting in the late fifties. He received the San Fedele Prize in Milan in 1958. In 1960 he had his first solo show at Galleria Galatea in Turin. That same year he made several life-sized self-portraits on gold, silver and copper monochrome backgrounds. In 1961 he created the series of works entitled The Present, painting his own image on a black background to which a layer of transparent varnish gave a mirror gloss.
In 1962 he perfected the technique of his Mirror Paintings: he produced an image on tissue paper by enlarging a photograph to life size, painting it with the tip of a brush, then affixed it onto a sheet of mirror-finished stainless steel (after 1971 the painted tissue was replaced by a silkscreen of the photographic image). These works directly include the viewer and real time, and open up perspective, reversing the Renaissance perspective that had been closed by the twentieth-century avant-gardes.
In 1964, at Galleria Sperone in Turin, he showed the body of work called Plexiglass—a first transposition in real space of the new open dimension of the mirror paintings, as well as a declaration of art’s “conceptual” character.
In 1965-1966 he showed a set of works, entitled Minus Objects, in his studio. These works, made in the contingent dimension of time and based on the principle of difference, broke with the dogma of the uniformity of individual artistic style. They are considered fundamental to the birth of Arte Povera, an art movement theorized by Germano Celant in 1967, of which Pistoletto was a an animating force and a leading figure.
In March, 1967 Pistoletto began to work outside traditional exhibition spaces. In December of that year he announced the opening of his studio, in a manifesto. In this context The Zoo arose—a group of people from different artistic disciplines, together with whom Pistoletto carried out actions conceived as creative collaborations from 1968 to 1970. Invited to the Venice Biennale in 1968, he published his Manifesto of Collaboration.
From 1985 to 1989 he created a new cycle of works, made up of surfaces and volumes in anonymous materials and dark, gloomy colors, called Art of Squalor, exhibited at Galleria Persano in Turin and at Galleria Pieroni in Rome.
In 1991 he was appointed Professor of Sculpture at the Vienna Fine Arts Academy, a position he kept until 2000. With his students, he developed an innovative program intent on breaking down the traditional barriers between artistic disciplines.
In 1994 began Project Art with which Pistoletto—by means of a program manifesto, public meetings, displays and exhibitions that involved artists of different disciplines and representatives of broad sectors of society—placed art at the center of socially responsible change.
1998 witnessed the establishment of Cittadellarte-Fondazione Pistoletto in a former mill in Biella, Italy, acquired by the artist in 1991. Here the goals expressed in Project Art are still being developed and accomplished.
2000 saw the inauguration, at the Paoli-Calmettes Cancer Institute in Marseille, of the Place of Meditation and Prayer, a multiconfessional, secular space conceived and executed by the artist.
In 2003 he was awarded the Golden Lion for Lifetime Achievement at the Venice Biennale.

Exhibitions
Michelangelo Pistoletto: Desde el Tercer Paraíso
For the second time, Havana City will be inserted into the large “mapping” of the Third Paradise...
22 May 2015 - 22 Jun 2015
Fototeca de Cuba
Havana

Exhibitions
Sleepless, The Bed in History of Contemporary Art
An item usually associated with sleep, the bed has accompanied us throughout human history. As an object,...
30 Jan 2015 - 07 Jun 2015
Belvedere
Vienna

Exhibitions
In Part
Exhibition “In Part”, curated by Nicholas Cullinan, is staged in the Nord gallery, one of the former...
09 May 2015 - 04 Nov 2015
Fondazione Prada, Milan
Milan

Exhibitions
Imagine. New Imagery in Italian Art 1960-1969
Pendant to the exhibition of 2014 dedicated to Azimut/H, which investigated the monochrome and the ‘zeroing’...
23 Apr 2016 - 19 Sep 2016
Peggy Guggenheim Collection
Venice

Exhibitions
Una colletiva
The gallery’s second exhibition of this year is dedicated to the own represented artists: Accardi,...
16 Mar 2017 - 15 Apr 2017
Tonelli
Milan

Exhibitions
Pistoletto
Galleria Christian Stein is dedicating a monographic exhibition to the artist in both its venues, Monforte...
25 May 2017 - 21 Oct 2017
Milan

Exhibitions
May You Live in Interesting Times at the Foot of Hills. How to Lie Low and Ski at Once. The Piedmont Pavilion
Castello di Rivoli Museum of Contemporary Art and Sandretto Re Rebaudengo Foundation present “The...
08 May 2019 - 20 Jul 2019
Combo Venezia
Venice